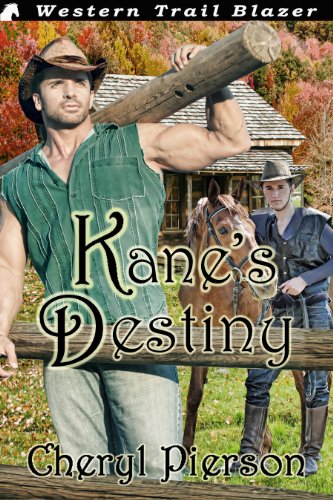 about this book: Kane's Destiny is the final book in the "Kane" trilogy. The first, Kane's Redemption, is the story of how Will Green, a 10-year-old boy, is kidnapped by Apaches after his family is murdered. Miraculously, a stranger, Jacobi Kane, dares to come into the Indian camp and rescue him. But later when one of the Apaches follows them, seeking revenge, Jacobi is badly wounded and must depend on Will to save him.

In Kane's Promise, the 2nd of the series, Jacobi and Will join a posse that is going after the remnants of the Apache warrior band who killed Will's parents and sister, and also Jacobi Kane's wife and two children. It's a fight to the death when the cavalrymen and lawmen are attacked by the Apaches.

Kane's Destiny takes place when Will is 13. He's matured some but still has a habit of saying what he thinks. When his well-to-do grandfather searches him out and tries to force him to come back to Boston with him, Will sets him straight in no uncertain terms. But when his grandfather reveals a secret, Will has a hard decision facing him about returning with the old man...especially after he overhears some of his grandfather's men planning his death on the ride home.