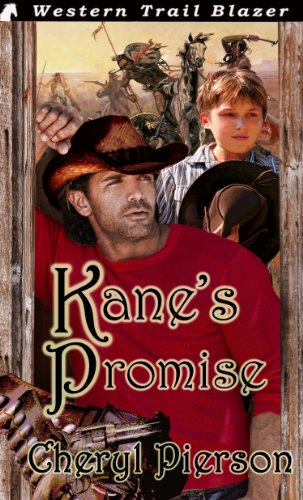 about this book: Kane's Promise is the second book in the Kane trilogy, following Kane's Redemption. It is the continuation of the story of Will Green, a young boy that Jacobi Kane has rescued from the Apache Indians.

When Kane's Redemption came to an end, there were still some things that had not been resolved--the capture of the rest of the Apaches that had raided and killed both Jacobi Kane's wife and children, and Will Green's parents and sister. When a band of lawmen come to ask for Jacobi's aid in tracking the remnants of the fierce band of warriors down, he has a decision to make: will he leave his new wife, Laura, to carry out the vengeance he swore to have for the deaths of his first family?

Once he's convinced to go, Will is not going to be left behind. He follows Jacobi, and together they help track the Indians, culminating in a bitter fire fight between Jacobi's men and the Apaches--but how will it end?

This series is great not only for young adult readers, but adults as well. Will learns some life lessons along the way, and they're not always what he expects. Though many of the problems are resolved in Kane's Promise, there's one huge dilemma that has yet to be confronted--that of Will's wealthy relatives in Boston who want him to leave his life with his new family behind for what they can provide.