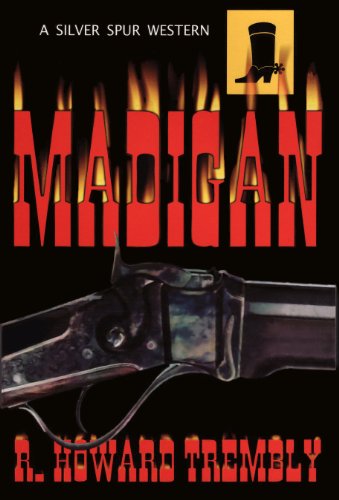 about this book: Madigan is a western in the truest sense of the word, yet it is different in the fact that it doesn't use the time worn plot that so many writers in this genre use, such as, a woman is widowed and about to lose her ranch to a big spread that will do anything to take it away from her. She is struggling to keep her ranch until a handsome young drifter shows up and saves her ranch while stealing her heart.

Madigan has just retired from the U.S. Cavalry and is on his way to California to seek his fortune in gold, when he is forced to take action against a band of outlaws to save the two women they hold captive. The women are from a hidden city of gold, and the outlaws want to find it.

After saving the women from the bad guys, Madigan is forced to interrupt his plans for California and save the lost city and its inhabitants. This book is fast paced and guaranteed not to bore the reader.

When Madigan first came on the market, the majority of the comments I received from readers were, "I stayed up all night until I finished reading it and still wanted more!" Surprisingly, women apparently like reading Madigan as much as their male counterparts.

When I decided to write Madigan, I was in the process of reading the diary of Cortez Deleon, one of the main participants in the conquest of Mexico, and have incorporated much of what I learned from that diary into Madigan, especially, about Montezuma's gold.

Another thing I'd like to mention: unlike some novels, other than Sci-Fi, the characters in Madigan cannot be shot full of holes and still function like nothing much has happened to them! If they are hurt, they show it. And in the interest of accuracy, I also tested the type of rifles, calibers, and loads used in Madigan to make sure any long-range shooting written about in the book was more than possible.