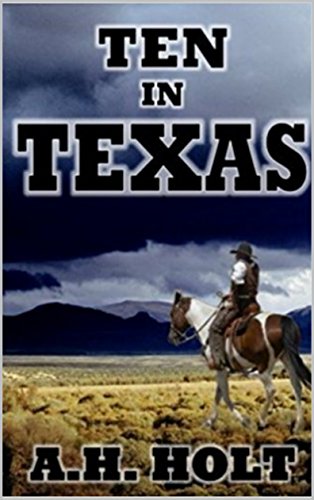 about this book: Ten In Texas begins in the confusion of the early break-up of the great XIT Ranch that covered most of ten counties in northern Texas. Will Gantry is just passing through. His plans are to see Old Mexico, but he is really just wandering.

He watches quietly as land seekers, obviously farmers, pouring from special excursion trains from the north. Beside them settlers with their wives and children are unloading all their belongings onto wagons, ready to claim their new home. He shakes his head, knowing what will happen to families trying to farm on the dry plains.

After a fight to defend a lady from a bully and a possible charge of battery, Will spends one night lying low in a draw near a small creek. He suddenly feels at home. As the story unfolds he meets and finds a friend in the local sheriff, hires a man he admires to buy land for him. Later he finds an experienced cattleman to help him build a ranch of his own. Soon he gets involved with the lovely widow and her young son he defended when he first came to town. Pendleton and his past is there, haunting him, but Will has found a new life and an end to his wandering.