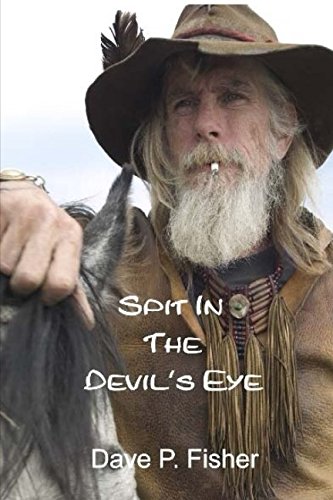 Book: Spit In The Devil's Eye by Dave P. Fisher

about this book: The westward movement of the mid 1800's forever changed the face of the American West. At first it was only trappers and explorers, then gold was found and the rush to the Pacific Ocean for wealth and land was on. The native tribes fought what they saw as the invasion of their country. They had no idea what lay to their east past the Mississippi River. The Civil War, and its end results, reset the entire playing field where the West was concerned.

Buck Drake was born to a Kainai Blackfoot mother and a worthless scoundrel of a British father. Raised a Blackfoot warrior he is one day betrayed by his father to the Fort Bridger soldiers during a raid. Twenty year old Buck is imprisoned and sentenced to hang until the war breaks out and the soldiers are ordered back east. Given the chance to hang or fight in a covert, behind the lines unit for the Union Buck chooses to go along to the war. He was never the same again.

It was in the cities that he saw the world his mother's people didn't know existed, and in the battlefields witnessed first-hand the power that would one day destroy the life they had known. Aside from the realization of what lay in the future for his people Buck is torn between his two bloods, no longer knowing where he belonged. He was a decorated war hero who left the war as somebody only to find that in the white world he was simply another despised half-breed. In the Blackfoot world he was honored and respected, yet their world was at its end.

Wandering the west he sought his place in the changing scene around him. Drifting back to the army as a civilian scout he finds himself railroaded for murder in a defensive shooting and sentenced to prison. With help from his war-time friends he is released to guide a manhunt for a murderous gang led by his British father who he long ago swore revenge on. The hunt crosses into Canada and to the Pacific coast. Here Buck confronts his past and comes to understand where his future lies.