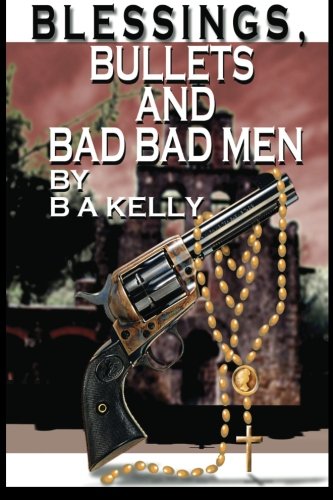 Book: Blessings, Bullets and Bad Bad Men by B. A. Kelly

about this book: My novel, Blessings, Bullets and Bad Bad Men, is listed as a western, but I feel it is more than that.

When the rejections first started to arrive, I was told things like, "We are always looking for writers of your talent, but this book doesn't fit our format." "It's not western genre, and it's not main stream, it falls between the cracks."

I think Frances Bacon (1561-1626) deserves a lot of credit for the plot of "Blessings.…" A quote of his which I once read, says, "He that hath a wife and children hath given hostages to fortune, for they are impediments to great enterprises, either of virtue or mischief." This brought about my "what if" thinking mode and Jim Blessing came to life.

Blessing is a drifter and he likes it that way. He wants to keep it that way, but a young boy and his dog, and a beautiful Spanish aristocrat get in his way, and after someone starts shooting at him, he has no choice but to deal with the situation.

I see this as a story set in the west of the 1870's. That is the period I researched, and being a city girl the research became extensive. Horses, guns, clothing, New Mexico Territory—I learned of a whole way of life. Many writers get bogged down in research, therefore the book they planned to write never gets written. I can see how it happens. This was one of the most enjoyable parts of putting my story together. I loved the research. And, it's true what they say, "Truth is stranger than fiction." If you were to write a true story about some of the things I discovered, no one would believe it was real, or they'd wonder how anyone could write something so ridiculous. So, I stuck with my imagination using what was real as a background for the characters in my story to come alive.

There's something for everyone to enjoy in this story, and not just fans of westerns.The majority of readers have told me the book reads like a movie, therefore I think I achieved my goal,and followed the most important rule of writing—Show, Don't Tell. Perhaps that's why, Blessings, Bullets and Bad Bad Men, made it to the Oak Tree Press Publishing House's Best Seller List for May 2012, and why it was a selected nominee for the Western Fictioneer's Peacemaker Award for Best New Novel of 2011.