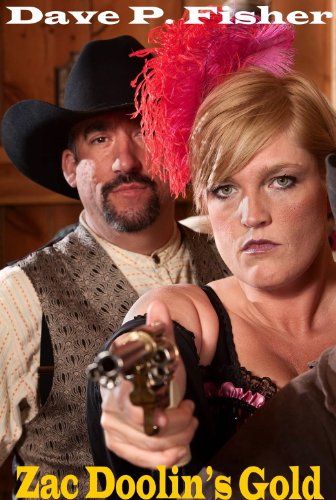 about this book: Candi Doolin will stop at nothing –

As they walked away, a blonde-haired woman in a red frilly dress that left her bare at the shoulders, stood out front of the Delta Saloon watching them with interest. Behind her stood a neatly groomed man in a white silk shirt, black vest, and tie watching the two as they walked down the street not paying any attention to anyone around them.

The man whispered anxiously to the woman, "I don't like the looks of this. What if she tells him?"

The woman smiled watching Spence's back as he continued walking. "He's kind of handsome. Anything she might say won't matter once I get to him."

"And what if you don't get to him and he takes up with her and the old man? We don't need him in the way."

The woman smiled, her blush painted lips indicating a sinister, rather than friendly, note. She turned and headed back into the saloon, walking past the man she whispered, "Than we'll kill him."

Spence Logan rode into Virginia City and within the hour got into a gunfight. It was for a good reason as he was saving a young woman from a man bent on doing her harm. What he didn't know was helping blue eyed Rose Kindle put him dead in the sights of Candi and Reg Doolin. Candi was deadly as a rattler and twice as mean. Spence wasn't sure why the woman wanted him dead, but the reason was coming clearer as he found himself being drawn deeper into a maze of secrets involving the blue eyed girl, a man on crutches, and the murderous Candi Doolin, all hunting for a dead man's trail to gold.