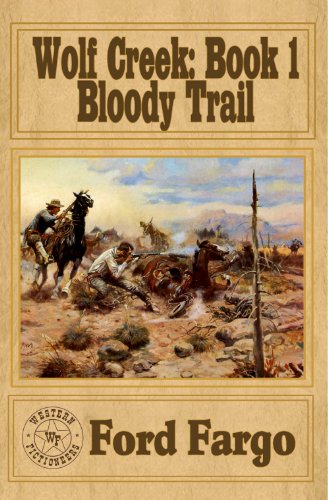 Book: Wolf Creek - Bloody Trail by Cheryl Pierson and others

about this book: Wolf Creek Book 1: Bloody Trail is the opening novel to a series of old western stories about the fictional town of Wolf Creek, Kansas. The series begins in 1871, just a few years after the close of the Civil War. The small town of Wolf Creek, populated with citizens who fought on both sides of the War, manages to get along--at least on the surface--despite those differences.

When a gang of border ruffians led by Jim Danby descends on the town, robbing the Wolf Creek Savings and Loan with a rash of senseless killings in their wake, an unlikely posse forms and goes after them, following them into Indian Territory.

Ford Fargo is the collective pen name used for this series, with three published novels as of March, 2013, and two more coming in the near future. Several more will follow, both in this series and as substantiating volumes of short stories about the individuals of Wolf Creek.