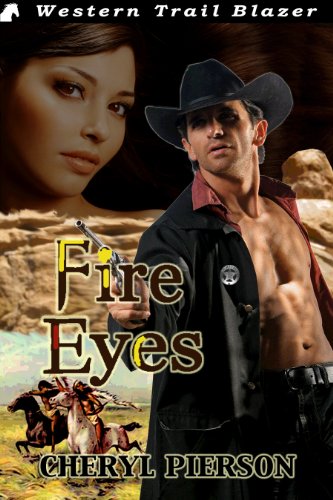 about this book: Fire Eyes was my "baby" It debuted with one company, but I had the opportunity to move it to WESTERN TRAIL BLAZER publishing and was able to add back in some of what I'd had to originally cut out of it. This allowed it to be something that would be enjoyable not only to women but to men as well--a western with a romance--not just a romance book.

The book is about a woman, Jessica, who is trying to raise a neighbor's baby alone in Indian Territory. A band of Choctaw Indians brings her a severely wounded U. S. Marshal, Kaed Turner, and leaves him on her doorstep. The relationship that blossoms between them happens quickly because of their circumstances. When several other marshals catch up to Kaed, expecting to find him dead, he rides out with them to find the gang of renegades who has been terrorizing that part of the Territory. Will he come back? No matter what, he's got to fulfill his duty as a marshal. But the leader of the gang has plans for Jessica that Kaed may not be able to stop.