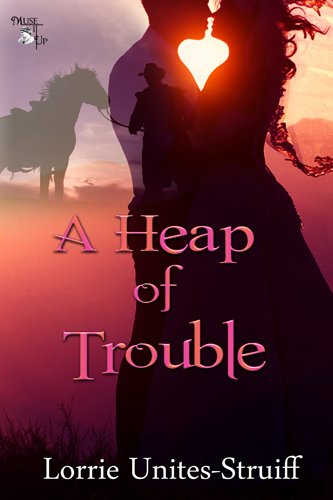 Book: A Heap of Trouble by Lorrie Unites-Struiff

about this book: A Heap of Trouble is a romance with a few sub-plots thrown in. Sheriff Cole Walker has his eye on the newly arrived Mattie Wells. While Cole tries his best to woo Mattie, he and his two deputies, Wade and Sully,are given a month to find the rustlers taking JJ's cattle or a war may start between JJ and the farmers.

In the midst of all his problems, another arrives. A ringtail monkey adopts Cole and to his dismay,the imp won't leave. Now Cole has another thief on his hands. The monkey, Beggar, steals the townsfolk's knackery at night and hides it under Cole's bed.Cole may be the only sheriff with a monkey in the hoosegow.

Cole bears the burden of his past. He is ashamed and unknowingly reveals his past to Mattie while in a stupor.

Mattie holds a secret she refuses to share and insists she will never marry. Can Cole change her mind?

Yep, Cole has A heap of Trouble on his hands.

Video: A Heap of Trouble by Lorrie Unites-Struiff