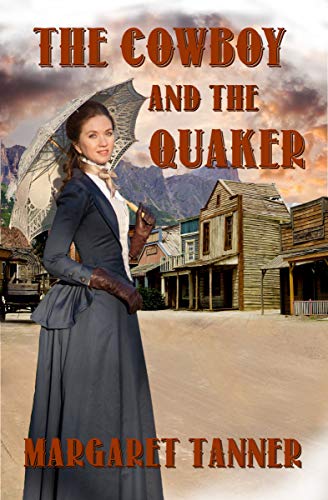 Book: The Cowboy and the Quaker by Margaret Tanner

about this book: A marriage in name only, for a period of a year, could save Ben Lonigan's farm, but he only has two weeks in which to find a woman who is prepared to accept his terms. He is desperate enough to even consider one of the soiled doves from the Flaming Star saloon.

Betrayed by the man she thought loved her, left pregnant and desperate, Rachael Fairchild is on the run. If she ventures back to Boston, her influential ex-lover will have her killed. Brought up by her Quaker grandparents until she is nine years old, then taken to live with an equally religious, Wesleyan Methodist aunt she has led a sheltered life. Easy pickings for a suave, affluent lawyer.

Bashed and robbed after arriving in Deadwood, Rachael is saved by Lottie from the Flaming Star saloon. She has a solution to Rachael and Ben's problems - they should marry each other! Ben and Rachael are both desperate enough to agree.

Can this temporary marriage between two scarred, disillusioned people, turn into something permanent? Will secrets from their past destroy their chances of happiness?

Having always loved western shows on TV and at the movies, she wonders why she didn't try to write westerns before now. Frontier Australia and frontier America have many similarities, and with the help of her friend and Western romance writer, Susan Horsnell,it was easier than she thought it would be.