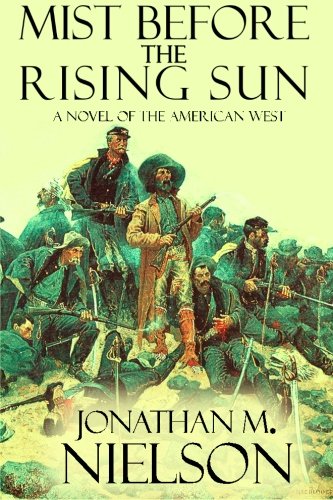 Book: Mist Before the Rising Sun by Jonathan M. Nielson

about this book: I came to this project out of my love of Native American-Western history and appreciation for a heroic, fascinating true story. It also struck me that the events depicted here and the characters prominent in this story, both White and Native American, encapsulated the essence of the struggle of civilizations which the long, tragic history of the 'Indian Wars' represented. Thus I saw in the events depicted here an opportunity to place them in the broader context of the broader political and cultural context of post-Civil War America as it expanded westward with such raw energy and violence.

It also struck me that through the lives, ambitions, fears, and prejudices of its characters- most actually having lived through the events I describe, a couple of them fictional actors in this drama- that I could weave a parallel story of love, honor and sacrifice that transcended race and skin color, that both humanized and offered insights into the point of view the protagonists and the life and death struggles they confronted. The relationship between Major Forsyth and Natalie, both real people readers will discover, is central to this story, as is the relationship between Roman Nose and Woman that Sings. By juxtaposing their points of view I hoped to humanize and soften what is otherwise a brutal reckoning for them all, albeit in different ways.

I spent six years researching, writing and traveling in writing 'Mist' which I conceived as a richly detailed narrative that would appeal to those familiar with the broad strokes of Western history and the Indian Wars and the general reader who enjoys history. The title is a quote of Chief Seattle in describing the way Indian peoples tried to avoid white encroachment by disappearing like 'mist before the rising sun.' The cover art is, of course, taken from Remington's famous painting titled appropriately 'The Last Stand.'