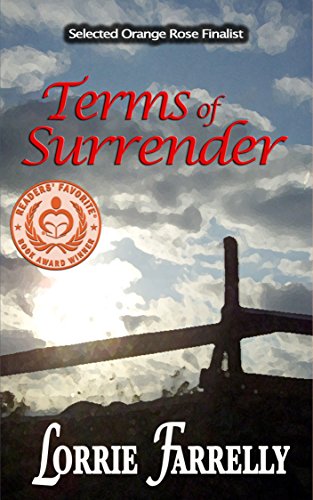 about this book: TERMS OF SURRENDER began as a very personal and emotional journey for me.

In an old box of papers and keepsakes I found a faded copy of an oath of allegiance to the United States signed by my Confederate great-great-grandfather at the end of the Civil War, as well as a parole pass allowing him to go home – if he swore never again to take up arms against the Union.

I wondered what would be in such a man's heart – Defeat? Honor? Bitterness? Loss? What could have driven a good man to forsake his country and fight for a new one founded on terrible injustice? Could he ever find peace? Would he ever have a true home again?

This is the journey paroled cavalry Captain Michael Cantrell must take in TERMS OF SURRENDER, and it leads him straight into another war. A stubborn, spirited young woman's life and home are at stake – and Michael's decision to stand with her will test all of his courage, mettle and passion.

Here is an excerpt from Orange Rose Award finalist TERMS OF SURRENDER:

The stranger sat rigidly upright, eyes wild, gory bandages livid. He hauled Robbie against his chest in a crushing embrace, the fingers of one hand clenched around the boy's arm, the other arm wrapped around his small back. Robbie screamed and flailed at the man's chest and face with one free, knotted fist. His legs, dragged off the floor, kicked frantically. The man mumbled a low, pleading litany of words at the child, his voice hoarse and gravelly. Other than gasping breaks in his speech, he reacted to the boy's pounding blows not at all.

After a first moment of frozen shock, Annie burst into action. Dropping the candleholder on the table, rushing to the cot, she grasped the man's large hands, desperately trying to free her small brother. When she could not loosen the stranger's grip, she scrambled over him onto the cot. Half-kneeling, nightgown and wrapper tangled in her legs, she wedged her body between the stranger and the hysterical, struggling boy.

"Captain Cantrell!" she shouted. "Stop it! Let him go!"

The wounded man's grip was like iron. Annie couldn't imagine where his strength was coming from. She could feel his whole body trembling against her, and the bandages wrapping his shoulder and chest were soaked with sweat and fresh blood.

"Captain Cantrell! Michael!" Unable to wrench his hands and arms from Robbie, Annie shifted and took Michael's face in her hands, her fingers spread along both sides of his hard, sweat-slick jaw. Turning his head, she forced him to look into her eyes.

"Michael!" she commanded. "Listen! You must let go! He's not Gavin!"

A flicker of confused uncertainty came into the man's eyes, and the huge, black, dilated pupils seemed to constrict slightly, giving Annie a glimpse of the deep blue irises.

Michael blinked. He stared again feverishly at Annie, and this time she saw the glazed sheen disappear from his eyes, to be replaced by an anguished look so raw and exposed that she felt tears spring to her own eyes in response.

"Look at him," she whispered.

Swallowing hard, Michael dragged his eyes from Annie and dropped his gaze to the boy grasped against his chest. He stared at him in astonishment and confusion. Thick, straight, coppery hair spilled onto the child's face above frightened, reddened eyes and a sunburnt, freckled runny nose. The boy shuddered in a silent, exhausted plea, and Michael was stunned to see the child's face streaked with tears. Who was this? Good God Almighty, what had he done?

Shaking, Michael instantly released the boy, who half-fell, half-scrabbled away from him, tumbling onto the floor. Incredibly, the woman still kneeled over him, practically in his lap, her hands still touching his face. He could feel his own fingers cramped and aching from the strength of the grip he'd had on the child.

"Are you all right, Robbie?" Annie asked quietly.

"Annie!" he gasped. "He grabbed me! He just up an' grabbed me! I didn't do nothing! Honest! I was just coming back from the privy. He was moving around and calling out, and I thought..."

"Never you mind, now, Robbie. Captain Cantrell didn't mean to scare you. He was clean out of his head." Annie laid a cool palm on Michael's forehead. "He's fairly burning up. Go fetch me some cool water from the pump. Hurry, now."

As Robbie scrambled away, Annie turned her attention back to the wounded man. He stared after Robbie, his expression stunned and appalled. Annie thought he looked terribly lost and terribly young.

"Thank you, Captain," she soothed, "for listening to me. Now look at me, look at me. Do you remember what happened? Do you remember where you are?" Her fingers gently caressed the chiseled angle of Michael's jaw as she turned his face back toward her. Her gray eyes were wide and lustrous, her mouth open slightly. He could feel the warmth of her breath on his cheek. He met her worried gaze, and for a single, brief moment all pain disappeared, replaced abruptly by a great hitch in his chest. Michael was dead certain his heart had stopped.

"Are you an angel?" he whispered.