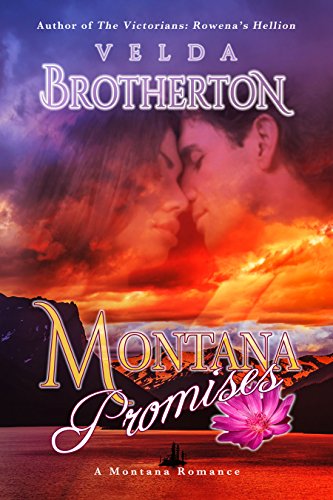 about this book: Montana Promises takes place in and around Virginia City, Montana during the gold rush in the 1860s just after the Civil War.

My dad went hunting in Wyoming and Montana every winter when I was growing up. I always wanted to go with him, but my being a girl made that impossible. He would return and tell stories of that magnificent Big Sky country. I thought the sky was pretty awesome in Kansas where I grew up, so I yearned to see Montana.

When I became a writer, I decided to set a book there and visit the state through research. That was 1994 and most research was done through books. I was so enthralled with the first book, that I wrote two more. Montana Dreams takes place during the days of the Union Pacific railroad spanning the country; Montana Destiny is set later when ranchers spilled into that vast country to claim thousands of acres on which to raise cattle.

All three were published originally by Topaz/Penguin and I learned quickly that New York editors had a very little concept of the West, except that it was "out there somewhere," this said with a wide sweep of one arm.

I had a phone call a few months after the first book came out. A woman told me she was raised in Montana and lived in California. She said reading my book made her feel like she'd gone home. That was probably the best compliment I could have received.

A few years later I was privileged to visit the ghost town of Virginia City and imagined my characters walking those streets. Big Sky country is indeed as glorious as the stories my dad told.

I'm pleased that Montana Promises is now available in audio with the fabulous Jeff Justus reading. He puts you there with his unique voices. A free sample is available at audible.