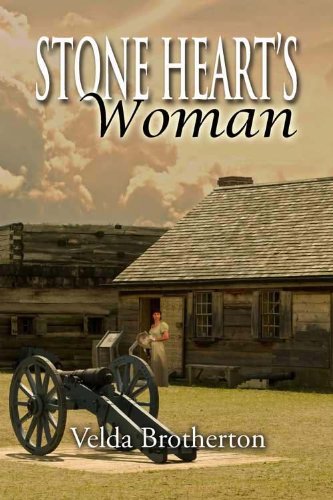 about this book: Originally Stone Heart's Woman was an historical novel called The White Cheyenne. Each chapter contained a scene of factual history followed by the fictional scenes surrounding that one. Sadly, no one wanted to publish it. So, since I had several historical romance novels published, I rewrote it as a romance but still heavy on history. It begins in an unusual way in the hero's viewpoint. Most romances begin with the heroine and I tried that but was never happy with it.

Aiden Connor's scene, where she is run out of town by some well meaning ladies who have tired of their husbands' interest in the red haired Irish entertainer, occurs in the last half of the first chapter. She flees with the help of a local man who it seems has an agenda of his own. Fighting him off she finds a soddy to shelter from the cold night. Stone Heart, a half-white Cheyenne who hates his with father, has been struck down in the battle between the Northern Cheyenne and the US Army at Ft. Robinson. It's January, 1879, the winter in Nebraska has been brutal and many have died from the cold alone. Stone Heart comes to himself lying with the dead Beautiful People, his people. He is sorely wounded and in need of a place to lay up and heal. The same soddy where Aiden hides. His first act is to threaten to gut her.

My western romances are gritty and not for the faint of heart. All are firmly based in the history of our country, some shameful, such as this one. All have a happy ending, because romances do. I'm so pleased that this one is now available in audio as well as Ebook and print.