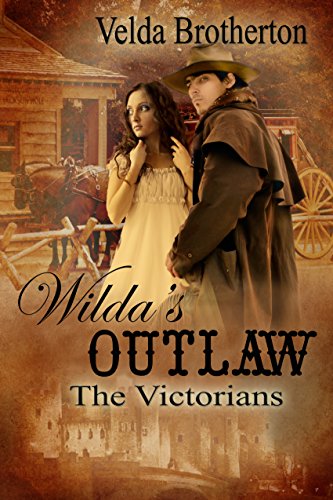 about this book: A group of Victorians journey to Kansas. Not because they want to Go West, but because they desire land the railroad has to offer. If you've ever traveled through Kansas you know you can practically see the entire state from any location. The wind blows year round, summers are hot, winters are frigid. Not something the English emigrants expect.

Wilda came to marry Lord Prescott. Her sister Rowena and cousin Tyra accompanied her from England, all orphans and looking for a better life. That Lord Prescott promised them. As it turned out, Wilda wasn't at all satisfied with the tyrannical Prescott. Tyra thinks if Wilda could get an outlaw to kidnap her, Lord Prescott wouldn't be angry and send the other two ladies back to England. Being the adventurous one, Tyra goes to the new settlement of Victoria to search for an outlaw.

Victorian ladies wore voluminous dresses and most didn't ride horseback. If they did it was side saddle. Being kidnapped by outlaw Calder Raines presents a lot of problems which he readily solves in a humorous way. When the outlaw gang tries to convince her to help them rob the bank she realizes that she may have been hasty, but it's too late.

This is the first of the series The Victorians. I'm working on the second book, Rowena's Lord and thinking about Tyra's book while I do so.