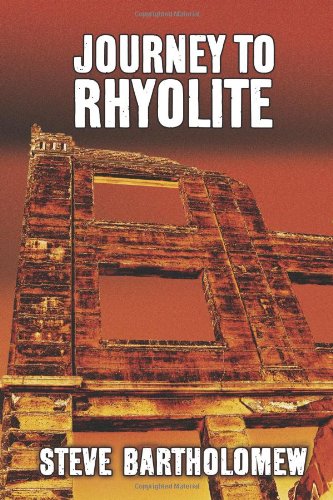 about this book: The town of Rhyolite, Nevada, located on the edge of Death Valley, went from empty desert to bustling metropolis in the span of two or three years. She vanished as quickly; now only ruins remain. The town drew me into her story. I saw in this town a parallel with the human condition.

I also wanted to write a mystery story. I have never been much into murder mysteries because I usually figure out the solution long before the end. I wanted to write a story in which the murderer is already known. In fact he has been convicted and served his sentence. This notion became entangled with the concept of human loss. Thus began my Journey to Rhyolite.

This is not a long novel, but looking at it now it seems one of my most complicated stories. Only after completing it I realized that I had composed a tribute to Nathaniel Hawthorne's Scarlet Letter. The name of the protagonist, Nathaniel, had been chosen long before I knew this. In fact I could not recall ever actually having read that book, knowing the story mainly from movies and summaries. I did read it and discovered many story elements I had unconsciously adopted. I have heard it said there are only a limited number of stories possible, and I suppose this is one of them.

One brief excerpt. This is Nathaniel's thought after his visit to the town's great gold mine:

As he turned away, he felt deeply shaken inside. The mine was like the sweat lodge. The experience caused him to question the nature of his own reality and his own life. The mine, the underground, was different from anything he had known before this. A different world. He looked out over the city of Rhyolite spread below him, reflecting that many of its inhabitants lived in both worlds, taking each for granted. He, Nathaniel, knew he would take nothing for granted again.

If there is any truth to the idea that real ghosts sometimes inhabit ghost towns, Rhyolite must shelter many of them. Her living citizens invested much and lost everything. Rhyolite died, but her spirit lives on.