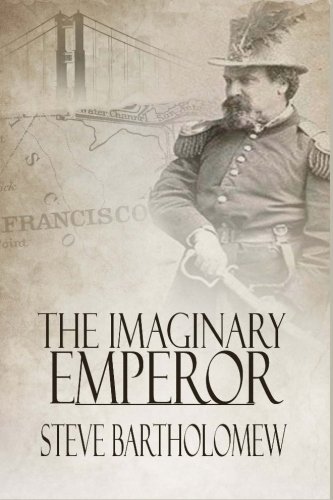 Book: The Imaginary Emperor - A Tale of Old San Francisco by Steve Bartholomew

about this book: The Imaginary Emperor is a tale centering around America's first and only emperor, Joshua Norton I, dei gratia Emperor of the United States and Protector of Mexico. If you have never heard of him, you have obviously never lived in San Francisco. He arrived there at the height of the Gold Rush, made a fortune and lost it again. Meanwhile, the world around him was going mad in the nation's slow progress toward civil war. Norton saw no reason not to go mad himself. As Emperor, he might cure the country's ills as well as his own. His life and times were filled with people who, if not mad themselves, often appeared so. There was the Supreme Court judge who murdered a senator and got away with it. And there was the Voodoo priestess who ran the San Francisco terminal of the underground railroad; she was close friends with that scarlet lady who was after the Silver King's fortune. And then of course there were all the ordinary folks trying to survive in a confusing and dangerous new age. Emperor Norton, despite rumors of his secret treasure, found he could not solve the nation's problems. But he left people a little happier than if he had never come and gone.

• "The author has truly done it again, and created a cast of memorable, honest characters set in a rich, evocative setting. His story winds through the narrow alleys, up the steep hills, and into some of the most amazing parlors of the day, and when the tale is ended, you'll have a much better understanding of the place and those times." — Reviewed by Richard Sutton, author of The Red Gate