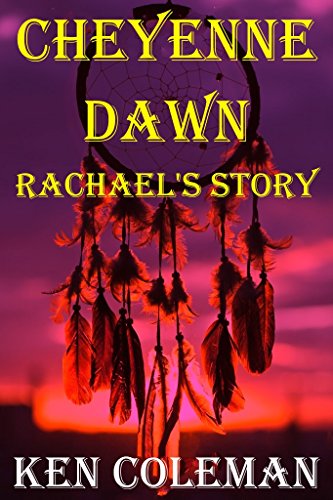 about this book: Anyone who has read "Revenge and Chameli Gonzales," Will probably, wonder what happened to Rachael and her daughters after they were kidnapped by Cheyenne Indians.

This is Rachael's story and tells about her long trek on foot with little water and no food, in her quest to find her children who have been abducted by Indians.

After trudging for many miles across parts of the great plains of Kansas, she finally succumbs to exhaustion and dehydration until, close to death and after all hope has left her, she is surprised and shocked to find her saviour is the leader of the Indians that kidnapped her children.

After Rachael and her daughter are molested by vicious and abusive buffalo hunters, the Indian once again comes to her rescue, after which she forms an unlikely alliance with him and they set out on an arduous journey across Kansas and Colorado with the intention of stopping an army of heavily armed killers from raiding a Cheyenne village and massacring many innocent women and children. Along the way they face and overcome many dangers and though she would not care to admit it, she finds herself drawn to the impressive and enigmatic Indian, at least she is when he is not tossing her into icy cold rivers or paddling her butt just for the hell it.

Although violent and often harrowing, this is also a love story which has many tender moments as the small group travel together toward their tragic destiny.

After writing "Revenge and Chameli Gonzales," I realised that there was scope to write a sequel, chiefly as many readers might wonder what had happened to Rachael and her children, so the opportunity to tell their story was too good to miss, especially as the original book received such good reviews.

This book is aimed at lovers of authentic and historical westerns as well as readers of romantic adventure. I feel it will appeal to anyone who loves a good romantic, adventure story with a hint of violence and tragedy thrown in.

Although the book only took six months to write, (half the time of the original,) I still did extensive research in order to make it as authentic as possible. However, because of the research I engaged in during the writing of, "Revenge and Chameli Gonzales." I already had a good knowledge of the authenticity of the era.

Anyone who has read and enjoyed the original will surely become engrossed in this story. Even if you have not read the original, this is a story in its own right and does not necessarily have to be read as a sequel.

I already have a third and final sequel in the pipeline. Ken Coleman.