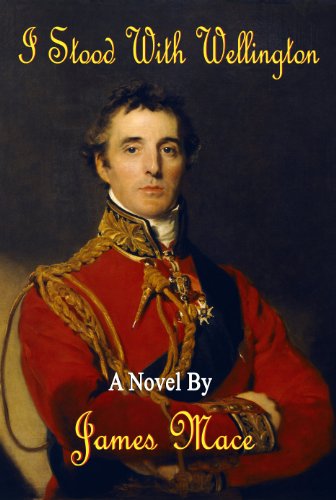 Book Review: I Stood With Wellington by James Mace

about this book: Having already written a series of books about the Roman Legions, I decided to see if I could in fact branch into other periods in history. My inspiration for the Napoleonic Era came from being a fan of the 'Sharpe' series by Bernard Cornwell, as well as the series of the same name, starring Sean Bean. I had always wanted to do a story about the Battle of Waterloo, as it is one of the most important events in history. Strangely enough, outside of 'Sharpe', novels about Waterloo are practically nonexistent.

As a way of testing the waters, I first wrote a short novella about an earlier even, the Siege of Badajoz in southern Spain in 1812. This would not be as time-consuming, plus it would allow me to see if readers were still receptive to this time period, especially with an American author writing the story. The end result was a novella called 'Forlorn Hope: The Storming of Badajoz'. It was very well-received in both the U.S. and Britain, and quickly became my best-seller. This inspired me to go ahead with the Waterloo project.

I chose the title, 'I Stood With Wellington', because my original intent was to write this story in the first-person. I quickly scrapped this idea, as it is extremely difficult to write this way, plus it makes the story very linear, as you are only focusing on one person's perspective. I kept the title, because to be quite honest I liked it. I achieved a personal compromise by having the main character, Captain James Henry Webster; write a few paragraphs at either the start or beginning of major chapters, as if he were keeping a journal. The portrait on the cover of the Duke of Wellington by Sir Thomas Lawrence is very famous throughout Britain and the Commonwealth. It is also simple, eye-catching, and my personal favourite picture of the Duke. So I purchased the rights to use it from English Heritage.

Research for this project was very involved, as it is such a well-known historical event. Ancient Rome had been a life-study for me, so there was a lot of information I already knew when writing my 'Soldier of Rome' series. This was new for me. I started reading any books I could find on the time period, especially those about Wellington himself. I also have a close friend in Wales, who is a historian as well as a retired Regimental Sergeant Major from the British Army. He had some great source material for me to use, to include books that covered all the technical 'nuts and bolts', as well as firsthand accounts from the time.

In the end, 'I Stood With Wellington' became my longest book to date. It tells the story of a company commander within the elite British 1st Regiment of Foot Guards, while also giving the perspectives of both Wellington and Napoleon during this turning of the pages of history. Like my other books, it is written with a relentless and graphic level of detail, especially in the battle scenes. Nothing is held back, and the horror of the Battle of Waterloo, which was the single bloodiest day of the entire 19th Century, is laid bare.

I Stood with Wellington

A good and addictive read with the same entertaining potential as his Roman Legion series. This is a well researched and accurate portrayal of events leading up to the pivotal battle that I had never envisioned. James Mace understands the soul of the soldier and a reader owes it to himself to read this. [by Rob]