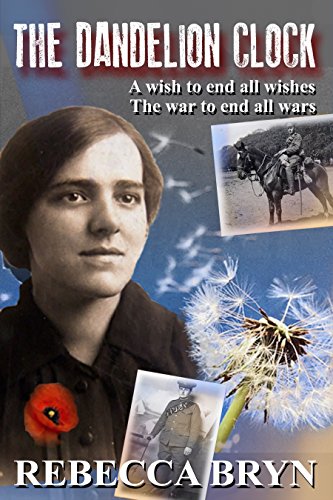 Book: The Dandelion Clock - A wish to end all wishes. The war to end all wars. by Rebecca Bryn

about this book: Bill is a farm boy who works on the Northamptonshire estate of the Duke of Buccleuch, Florrie, his sweetheart, is a dressmaker who is struggling to bring up her brothers and sisters after the death of her mother. It's the summer of 1914, and Bill is plucking up the courage to ask Florrie's father for her hand in marriage, when war is declared.

Like many of the young men of Britain, Bill joins the local yeomanry and is sent to Egypt with his beloved horse, Copper. For Bill and Florrie, life will never be the same again as they endure the heartbreak of war. Can their love survive five years apart?

The Dandelion Clock is inspired by my grandfather's time with the Royal Buckinghamshire Hussars and the Queen's Own Worcestershire Yeomanry in Gallipoli, Egypt, and Palestine. It's an insight into the struggles at home and abroad that our grandparents and great-grandparents endured with courage and resilience.

It was supposed to be the war to end all wars, but the loss of 20 million souls, and 8 million mules and horses, occasioned by the assassination of Archduke Franz Ferdinand and his pregnant wife, taught humanity nothing. This tale is told 'lest we forget'. There are no winners in war.

Other books by Rebecca Bryn (more)