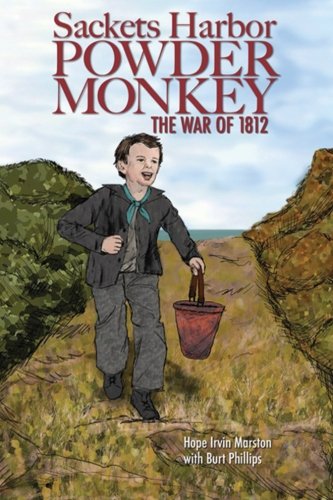 about this book: This is the first book about the opening battle of the War of 1812, as seen through the eyes of a Sackets Harbor powder monkey on the warship Oneida.

It's 1811 and eleven-year-old Rankin McMullen is ready for action. He has joined the brig Oneida to fight the British and end the laws that force New York farmers to smuggle their potash across Lake Ontario to Canada in order to survive. As a powder boy on the Oneida, his job is to carry gunpowder up the ladders from the lowest part of the ship to the carronades on deck. His job is the most dangerous and the most important. If he doesn't get the gunpowder to the carronades, they can't be fired. The enemy knows that, so he is the first to be targeted. Eventually the shooting war begins. What happens when five British ships threaten Sackets Harbor surprises Rankin and everyone else.

This book was written at the request of Constance B. Barone, Site Manager of the Sackets Harbor Battlefield State Historic Site. She says, "War of 1812 stories like this one bring history to life for today's readers. Inspiring our youth through tale of grit and courage promotes character building qualities needed in life's unpredictable journey."

Gary M. Gibson, Ph.D., Naval Historian and Sackets Harbor resident says, "Ms. Marston has done her homework. This is historical fiction, based on fact. Readers of any age can enjoy it."