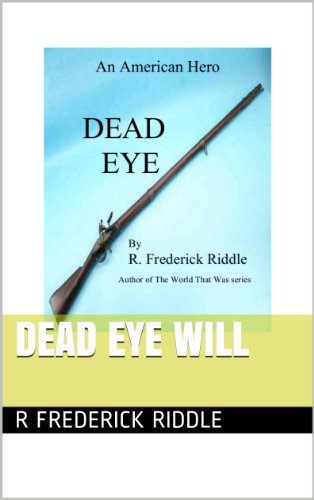 about this book: Having been an author of biblical history, I thought it appropriate to turn my attention to American history. Ever since childhood I have been fascinated with history, be it world, American, or biblical. History is just plain interesting!

Born and raised in Michigan, it was natural for me to look at Michigan history. What makes this book truly unique is that it takes place in Michigan and the main character was the brother of my ancestor James Riddle.

Originally titled the Adventures of William Riddle, I eventually came up with Dead Eye, later changed to Dead Eve Will to avoid conflict with similarly titled books. As soon as I decided to use Dead Eye as the title, I pictured in my mind a musket. I had to do a bit of research to find the right picture, but find it I did.

As for the story itself, William starts out as a 13 year old boy who's size often confused people into thinking he was 18. He runs away from home, joins the army and soon becomes known as Dead Eye. The story depicts several instances within the War of 1812, but also follows his life afterward up until 1836.

Whether serving the United States or serving the Territory of Michigan, Dead Eye proves to be an American Hero.