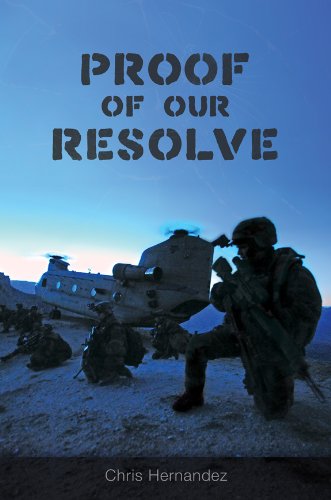 Book: Proof of Our Resolve by Chris Hernandez

about this book: Proof of Our Resolve is a novel about a platoon of Texas National Guard infantrymen in Afghanistan, fighting against a Taliban insurgent cell. The book was inspired by my experiences in Afghanistan in 2009. I wrote the book in part to get the story off my chest, and in part to give readers a view of what the war can really be like. Many people, including military veterans, have a distorted idea of how the war is conducted and what challenges we face. I also wanted to create realistic characters who aren't supermen, who make mistakes, and who feel pain and loss. I wanted my characters to be like the men I served with: ordinary men in extraordinary circumstances, who stand out from the crowd only by the choices they make.

Proof of Our Resolve follows Sergeant First Class Jerry Nunez and his platoon from a horrific bomb attack and ambush, through operations to strike back at the Taliban, to the final climactic fight against a Taliban leader on his home territory. The American and French soldiers who carry the weight of responsibility for the war are as real as the men I stood shoulder to shoulder with. The combat scenes are as real as my memories.