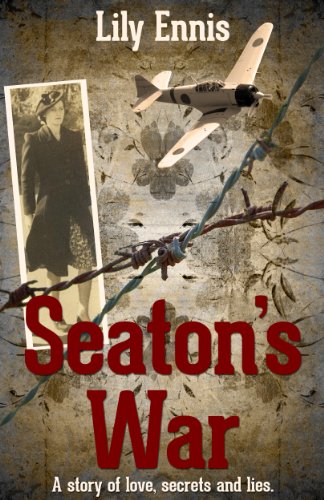 about this book: A sleepy New Zealand town experiences the second World War when a Japanese submarine beaches. The surviving seamen are rushed to a compound outside of the town where they are forced into mining gold by the guards.

In the same bush valley locality a physics professor is conducting experiments as part of a world wide push to calculate the exact distance Earth is to the moon. The answer to this will push competing nations into the space race.

Kitty is not content to sit at home knitting socks for red cross parcels for the boys fighting overseas and before she knows it she is embroiled in the deceptions that the war brought upon the town. Links to the war in Europe are made through letters which weaves another thread through the book.

Seaton's War is set in a real town against some real events that occurred. In researching the era I found a neighbour whose father saw a Japanese Glen float plane fly across his farm enroute to Auckland. His father was about to join the air force and the odd sound of this plane made him look up.

The physics professor was part of a project called Project Diana.

The beautiful woman on the front cover is my grandmother. It was common in 1940s Auckland for photographers to photograph people in the street. She was hold the hand of my father.