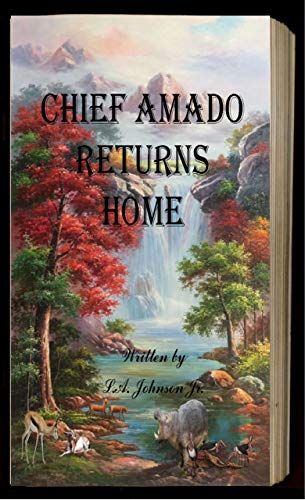 about this book: In a jungle village high up on Ghost Mountain, the people were happy and lived well, their leader was Chief Amado. The chief told stories and had words of wisdom. All of the people in his village loved his stories which left everybody around him hypnotized.

For years nothing exciting happened in the village. Then one day a man wandered into their village, saying he'd gotten lost in the jungle and asked for something to eat. After he had eaten, he told the people of Ghost Mountain how he felt about them, He told them that people in neighboring villages were starving and had nothing. The man's words and attitude were aggressive and violent, but Chief Amado said he would go to the nearest village to see what was going on.

Chief Amado left his village the next morning and didn't return for years.

When he returned to his village he was a changed man and spent weeks in his hut alone unhappy. When he left his hut, he tells them about the wicked behavior of the people in villages all over Africa. He told them that people were doing all kinds of nasty things.

The Voodoo Queen roams the forest around her hut at night because a deadly affliction prevents her from the exposure of light. Even though she has powers, she lives with ghostly creatures. She wishes to see the sunrise, but that's impossible. Her only comfort is her deck of Tarot cards, which reveals her fate.