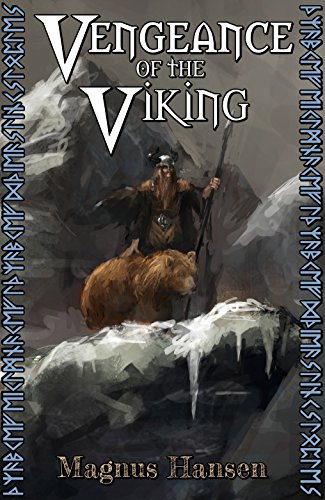 Book: Vengeance of the Viking (V for Viking Saga Book 1) by Magnus Hansen

about this book: A Viking, his pet bear, and destiny. The year is 977AD. Recently escaping his captors, Torleif returns to his village on the South-West coast of Norway. He soon discovers that his capture by a rival village was more than just an accident.

Soon, he is caught up in a web of political intrigue. He tries to find out who is conspiring against him, and why. It is then that he discovers that forces much greater than he imagined are using him as a pawn.

He slowly uncovers the plot against him, and it appears that his very own chieftain knows more than he is letting on. Torleif's greatest ally is Hugin and Munin - strange priests of Odin, who are named after Odin's pet ravens. The priests are shunned by the rest of the community for their strange nature - they are conjoined twins. They speak to Torleif in half-truths, and it soon becomes clear to him that the priests are playing both sides.

Sensing the web of lies that is slowly consuming him, Torleif lashes out and demands justice, only to be rebuffed at every turn. But he is not one to let things go...he will find his vengeance!

Other books by Magnus Hansen