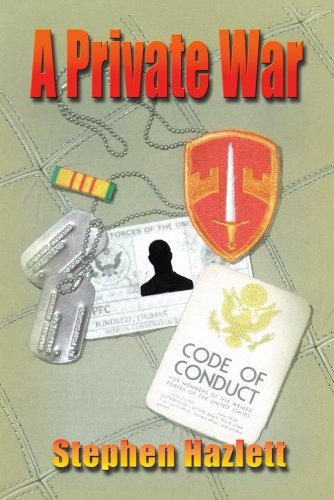 about this book: This novel started as a short story, written year ago after I'd returned from Vietnam. It was a simple tale at first, about a soldier sickened over the hypocrisy of the war, deserting his outfit and making a furtive escape back to "The World." Years later, I took a look at the story and realized there was something much bigger there, waiting to be told. That idea morphed into what became the novel, "A Private War."

It's the story of Thomas Kindred, a nineteen-year old U.S. Army PFC sent into the craziness of the Vietnam War shortly before the Tet Offensive of 1968. From a naive young soldier just doing his job, he grows into a jaded cynic, seeing the day-to-day uselessness of sending thousands of soldiers into the maw of a war they neither want nor understand. He deserts, becoming a black marketer, living with a young Vietnamese prostitute, until he is forced to make a desperate escape, out of the war zone and into a different life.

Thirty years later, he's living as an exile in Canada, with the war long forgotten. It all comes back in the form of a plea from a former Vietnam buddy, Rick Goody. Rick believes his life is in danger from the anti-war group he's been a part of for years. This leads Thomas to return to The States to search for answers, first of the danger to Rick and then of Rick's anti-war group, that has turned to violence. In the process, Thomas's longtime girlfriend, Carmen, disappears. His search changes into a dangerous odyssey, of a rediscovery of himself and the America he'd forgotten about; and of the search for Carmen. What he finds are the answers to the Private War he's been fighting since the days of his young soldier self.

• A Private War, by Stephen Hazlett, is considered by many to be the best work by this author. It is about a Vietnam era deserter and his struggle to bring conclusion to the disordered events of his life. As a Vietnam era veteran, I can vouch for the angst and conflict of the era that Stephen so carefully and thoroughly describes. More than just a story, A Private War documents the struggle of one man that mirrors the struggles of many of that era.
— oldsalt3103 – Amazon reviewer

• The author, according to the notes at the end, served in Vietnam, which makes it a first-hand account. The story starts in Canada, where Thomas Kindred, a Vietnam deserter, receives a call from one of his old comrades. The call leads to an Odyssey ranging from Seattle, San Francisco, New York, then back to San Francisco for a rather surprising denouement. The cast of characters are a mixed bunch, including some very odd members of a left wing antiwar organization drifting towards anarchy. An interesting read.
— Jacqueline Unitt – Amazon reviewer