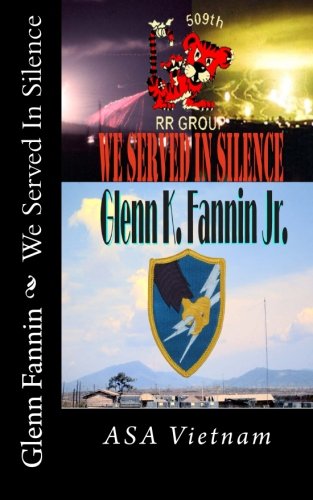 Book: We Served In Silence by Glenn Fannin

about this book: Wild! Crazy! Absolutely INSANE people in charge of our national security in the Vietnam War! A story of Army Security Agency agents in the Vietnam War in 1968. From the draft, basic training and spy training to the war. Their lives and loves are exposed and the characters come together to accomplish their missions on the ground, air and water. The outcome of the war may depend on what may be described as "M*A*S*H" meets "Catch 22" in this action packed adventure. Includes shocking new theory on the capture of the U.S.S. Pueblo! Action packed chapter on using Swift Boats as spy platforms. The first novel in a quatrain.

Watch for the next in the series "The Men Behind The Iron Curtain." It is about the Army Security Agency in Europe during the Cold War. To be released later this year. "The Dragon Hunters," a story about the ASA in Asia, will be released next year. The fourth novel has been started but has not yet been named. The writing of the screenplay for "We Served In Silence" is in production. Buy your collector's copy today of this first issue of a story which can not be told in one book. Publisher and editor Mrs. Glenn Fannin (E. Jo Fannin).