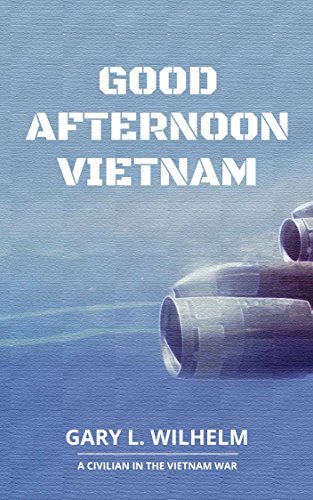 Book: Good Afternoon Vietnam - A Civilian in the Vietnam War by Gary Wilhelm

about this book: This book is about the experience of a young engineer working with the Marines as a civilian in DaNang, Vietnam, during 1968-69. Arriving in a blue suit, white shirt, and tie, I was immediately provided with a flak jacket and gas mask. No one was there to meet me at the airplane. A little lost, I began a 19-month adventure that ended up with me basically escaping the country.

The primary readers of this book are people who remember the Vietnam War. Did you know there was intelligence gathered by computers at the time? Most people don't know about the Elint system that was in use during the war. It is not even mentioned in the recent television shows about the war. Yes, computers. Yes, intelligence gathering.

As part of a local group of senior writers mostly writing memories for their families, I began writing different stories I remembered from the war . . . until I finally had an actual book manuscript. This was something I wanted to share with family and friends and thought self-publishing was the route to take. I'm glad I did, as the book has photos and memories that would have perhaps otherwise been lost.

The title comes from an obvious reference to a movie from the era, but since I arrived one hot afternoon, the title change to Good Afternoon Vietnam fit the best. I thought no one could live in such heat and did not expect to survive there so long at all, much less without any gun.

• "I'm going to start off by saying that I am NOT a fan of war stories ... BUT this book is DIFFERENT! Alcohol was used as currency, and even going to buy toothpaste could involve danger." — from Amazon UK

Video: Good Afternoon Vietnam - A Civilian in the Vietnam War by Gary Wilhelm