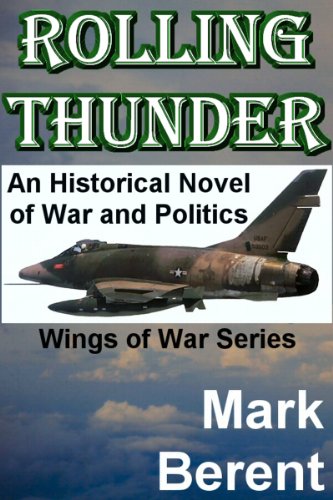 about this book: The book is one in a five-book series about how politics affects war. To tell the story, I have three principal characters in my books: two Air Force and one Special Forces soldier. Court Bannister, an Air Force captain overshadowed by his famous movie star father who fought in WWII, is driven to prove his worth to his comrades - and himself. Toby Parker, is a brash first lieutenant who gambled his innocence in the flames of war. Wolf Lochert, is a Special Forces major who ventured deep into the jungle to rescue a downed pilot - only to discover a face of the enemy for which he was unprepared.

Far from the combat zone in Washington at their infamous Tuesday luncheons, President Lyndon Johnson and his Secretary of Defense, Robert McNamara, pick not only the targets but set restrictive rules of engagement that ensure Air Force, Navy, and Marine pilots will be shot down as they try to perform their mission. Johnson and McNamara do not permit any military presence at these luncheons as they are convinced they know best. Note that neither ever had any combat experience. (Although Johnson demanded and received a Silver Star for being a passenger on a transport that flew in a huge area designated as a combat zone.)

From the Pentagon, Air Force General "Whitey" Whisenand lays his stars on the line as he attempts to convince Johnson and McNamara that if we must fight in Vietnam, there is a much better way.

Four airline stewardesses fly the civilian contract flights that bring American soldiers to and from the war zone in Vietnam have difficult love affairs with G.I.s and fighter pilots. After one flight they come under attack while on an airbase. They are strong women who become involved in the war and are able to separate the war from the warriors they love.

There are many strong supporting characters that range in rank from sergeant to three-star generals. In addition to the White House and Pentagon, there are CIA officials, ambassadors, politicians, and an ubiquitous, extremely liberal newsman who is the half-brother of the USAF pilot, Court Bannister.

All my characters are composites of people I have known, talked to, or researched in books. Not so the politicians. They are real and all their damning sentences written in the series are words they uttered sometime during their lives. My books might be called works of fiction, but they are thinly disguised historical fiction.

As Tom Clancy said: "A taut, exciting tale of good men in a bad war. Berent is the real thing."

And W.E.B. Griffin wrote: "Rolling Thunder is terrific - a novel of exceptional authenticity that hits like a thunderclap. A decorated Vietnam pilot, Mark Berent knows planes and men and battle, and he whirls them around in a story of uncommon strength."

• Write about the benefits your book offers to its readers!
Rolling Thunder allows the reader to understand the back stories of the men and women involved in the Vietnam War, both on the front and at home, be they warriors, politicians, or spouses.

• What inspired you to write this book?
I became consumed with an overwhelming desire to tell the story of the men who gave so much of themselves in the Vietnam War, the most unpopular war in American history. I wrote because I wanted these men to live in more than the minds of their loved ones and their comrades: I wanted them to live in the minds of the next generations and to inspire those who are considering joining the military or the civilian aviation community. I wanted them to live in their minds and inspire anyone who wants to read about real Americans. I wanted to pass on the legacy of these fine and gallant aviators and ground troops who gave so much.

Furthermore, I wanted to write of the military flyers and of the superb aircraft they took into battle bearing proud callsigns now burned in fire in our halls of history; the Thuds and Sandys, Phantom and Jolly Green, Dustoff and Spectre, Misty, Laredo, and Wolf, Candlestick and Hobo; the list is endless. Army, Navy, Air Force, Marines, and our allies from Australia and New Zealand, Thailand and Korea, who flew so loyally by our sides. And of the Vietnamese pilots and crewmen who fought so desperately to save their country from the communist invader.

But there is the dark side of why I am a military writer. The dark side that surfaces in untoward moments when bad memories spring unbidden from a well I try to keep capped. Moments when others, not of the sky, hear my harsh laughter and see the frost in my eyes. It is the side that bears extreme malice and near-consuming rage toward those who wasted the lives of my fellow airmen on missions that accomplished little except strengthen the enemy's resolve. Missions that gratified only the arrogant civilian Caesars who, at White House luncheons, picked not only the targets but the bomb loads and the ingress and egress routes as well. It is the side that detests those members of the media who trivialized and scorned our efforts; it is the side that despises that wretched movie woman who sat at an enemy antiaircraft gun, made broadcasts from Hanoi, and called our tortured POWs liars; it is the side that bears hard anger toward some of our own men in uniform who saw war only as a career enhancing program. It is also of these contemptible people I am compelled to write.

As I found out, one book was truly not enough to tell the whole story so I wrote four more in four years as a series.

• Who are the primary readers of your book?
Those who want to know what really happened during the Vietnam War. I've been asked by people from England, Germany, Italy, Thailand, and of course the United States, as to what really went on in Vietnam, the Pentagon, and the White House.

• How long did it take to write it?
One year and that includes research. Same for the other four books in my Wings of War series.

• How did you come up with the title?
Rolling Thunder was the name that President Johnson and Secretary of Defense McNamara titled a disastrous limited bombing campaign that caused far more harm than good.

• Why did you choose this cover?
I chose this style of cover because it dramatically shows the type of fighter that plays a major role in the book. Each of the other four books in the Wings of War series have relevant aircraft on their covers. They are the MiG-21, F-4, Jolly Green Rescue Helicopter, and a B-52.

• What was the hardest part of writing your book?
There were two mutually exclusive hard parts. One, of course, was reliving my four years and one day in combat. The other was simply forcing myself to sit down and write. Years ago I read the autobiography of Sloan Wilson, the famed author of The Man in the Gray Flannel Suit. In it he said: "The man who writes professionally must let the grass grow." (Of course now we know there are hundreds of top-selling female authors.)

I was living on a horse farm in Virginia and had many daily chores. I found I would much prefer to mow the lawn, Bush Hog weeds, muck stalls, or put up tons of hay rather than enter my office and write. In other words, I made excuse after excuse. So, after I got the contract for my first book, I checked into the BOQ at the Quantico Marine Base and started banging away on a clunky computer's word processing program. My wife, an equestrian and construction company owner, built me a writing studio. Much, I suppose, like Ernie Gann's on Friday Island. So I had no more excuses and my head was clear for a total of five years to write the five books.

I set a goal to write about six pages each day. If I was done by noon, fine. Other times, if I had to work until two in the morning, so be it. As I mentioned, it takes enormous personal discipline. You writers know what I mean.

• Did you do research for your book?
I did enormous research for the books. Although some may think my main character was based on my exploits, he is not. Of course I used some of my experiences but I traveled all over America interviewing combat fighter pilots and Special Forces soldiers for their experiences. I spent days at the Air University Library at Maxwell Air Force Base, Montgomery Alabama, and the library at the Army War College at Carlisle Barracks, Pennsylvania. Further, I bought close to 1000 nonfiction research books to study and analyze the living characters in my books. I devoured several on Lyndon Baines Johnson, Robert strange McNamara, General Westmoreland, Pres. Nixon, all of the books by POWs from the Hanoi Hilton, and of course books on the war protesters such as Jane Fonda, Tom Hayden, Donald Sutherland, and the like.

• Did you learn anything from writing your book and what was it?
From an author's standpoint I soon found that writing takes incredible personal discipline. As a retired military combatant I learned from my research that many of the terrible rumors we had heard in the field about the administration's conduct of the war were true.