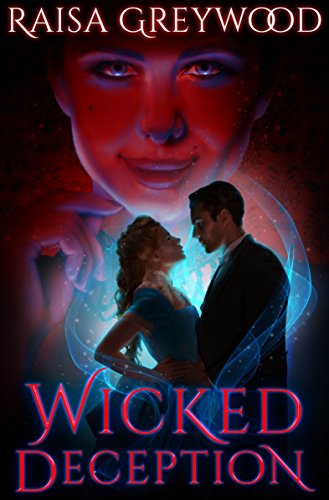 about this book: Wicked Deception is the first in the Wicked Magic trilogy, and my debut novel. It's now available as a permafreebie at all major retailers.

The ending sprang into being LONG before the rest of the story did, inspired by a lovely photograph of an amateur model I know. She wore a red dress and knelt in the center of a Turkish carpet with her head on the floor, arms outstretched over her head. It was a stunning photo, powerful and moving. I bought that photograph for five dollars. When I learned the model had done the shoot for her portfolio and wasn't paid, I caught up with her and bought her dinner.

Before I knew it, I had a thousand gorgeous words describing the death of my heroine. For anyone considering burning me in effigy, I didn't use it in the final product. I won't say no one died, but it wasn't the heroine. Or the hero, for that matter.

• WICKED DECEPTION was as disturbing as it was scandalous as Ms. Greywood entwined an engrossing plot filled with characters that will leave you guessing as to which side they're on. — The Romance Reviews