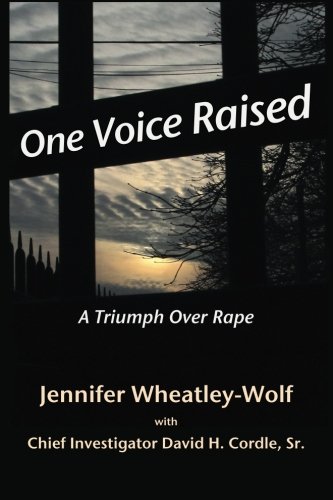 Book: One Voice Raised - A Triumph Over Rape by Jennifer Wheatley Wolf

about this book: As a victim of rape, it's hard to remember that the crime isn't who you are, it's who the rapist is. It doesn't define you. It changes you, but it doesn't define you. Every now and again, events in life come full circle and we get to see how or why they unfolded as they did. It would take 20 years for technology to catch up with the evidence collected on August 21, 1988 and make it possible for Chief Investigator David Cordle (co-author) to solve my cold-case. During this time my attacker walked free and continued with his life of abuse and crime.

In 1988 I was traumatized by rape and let my life fall apart because of my fear of the man who raped me. It would take a lot of support from friends and family and the realization that every day I spent trapped in fear & drinking myself into a haze was another day lost to this man. I was killing myself by empowering him. Finally and unbelievably, on January 13th I took the stand against the man who raped me and realized just how empowering it was to redirect all the shame, fear, embarrassment and anger back to their rightful owner~the man who raped me.

"What an incredible story. If it were fiction, Jennifer Wheatley-Wolf would be critically acclaimed for her writing abilities, but the fact that it is a true story makes it that much more amazing. This book is truly inspiring for anyone that doesn't want the quiet and voiceless to endure one second of what Jennifer encountered and lived with for 21 years." Mack B

Survivors of rape are unintentionally suppressed and shielded from public view. Although the identity of a victim is withheld as a means of protection, I feel this protection crates a shroud of anonymity that intensifies the feelings of shame and humiliation in the victim. The time has come for a change. Talking about sexual assault and rape and removing the shroud of anonymity cloaking the victims gives them back their identity. By bringing the discussion of rape to the forefront, we empower the survivors.

Every day in so many ways we see and read about horrible crimes wherein 'Joe Smith' or 'Sally Ann' was robbed, beaten or murdered. But, sexual assault and rape crimes are saved for a small inclusion in the 'Police Beat' section of the paper. And never is the victim's identity revealed. I believed the more people who knew about my attack, the greater the chance that someone would come forward with some information that would help solve the crime. Although that wasn't the case, it didn't stop me from mentioning it whenever I found someone who would listen. Rape is about power. Who has it. In this crime, the rapist gets part of his pleasure from stripping the victim of her power, of asserting his power over her to make her submit to him. By reporting the crime, by seeing the investigation through to the conviction, and by speaking out, the victim regains the power stolen from her. I would like to see every victim speak out against rape. Many voices raised against this crime become one powerful voice raised with a strong message.

That is my legacy.

You are a rapist. That is how the world will remember you."

UPDATE: On July 16, 2012 another victim was linked through DNA to the man who raped Jennifer. This violent rape occurred on May 31, 1987 in Montgomery County, Maryland. So far science and hard work has linked 3 victims to this rapist. There is only one person who knows how many more victims there are and he's not talking.