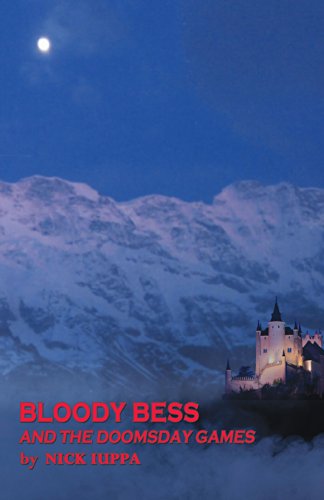 Book: Bloody Bess and the Doomsday Games by Nick Iuppa

about this book: You know the Holodeck in Star Trek, the room that the crew of the Starship Enterprise can go into when they want to find themselves in a whole new world? There they find realistic representations of characters that they can speak to and touch. There they can participate in dramatic, well-planned adventures as immersive as life itself? Do you think that such a system is possible?

Bloody Bess and the Doomsday Games tells a sci fi story of such a system, only the government decides to stage their powerful simulation in an ancient European village which was once the home of the greatest female vampire of all time. The story tells what could happen if Bloody Bess and her irresistible lover Ferenc suddenly take over the technology and begin transforming the project workers and the virtual characters into vampires.

Donny Vito, a great Hollywood producer director, has been brought in to lead the design team, but he has his own reasons for joining the project. The girl he loved in high school, the only girl he has ever loved, died when they were very young. The leaders of the project convince Vito that this new system can help him create a virtual representation of his long lost love. In the end, Donny's story and that of his girl collide with the worlds of vampires and technology in a spectacular battle for the survival of humanity.

This is a love story, a horror novel, and a detailed exploration of new technology that will some day transform our lives.