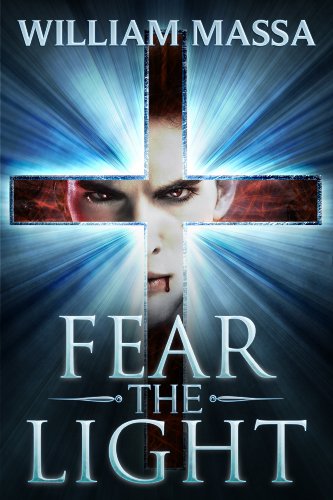 Book: Fear the Light - Who Murdered Dracula? by William Massa

about this book: Imagine a murder mystery/slasher thriller where the monsters are the victims! Inspired by Agatha's Christie's And Then There Were None/Ten Little Indians but with vampires!

Many had tried to kill the Count over the centuries. All had failed. Until now...

Eight vampires gather at their maker's castle to solve the mystery of who killed Dracula. But as the sun rises outside the chateau, a voice cries out and another vampire is slain. Trapped inside their master's lair, the sun burning bright outside, Dracula's children realize that they have met their match - a formidable killer who plans on picking them off one by one! As the daylight reigns and their numbers dwindle, a dark suspicion grows - could the killer be hiding in plain sight?

William Massa is a screenwriter (Return to House on Haunted Hill), script consultant and book reviewer. He has lived in New York, Florida, Europe and now calls Los Angeles his home.

William writes horror, thrillers, science fiction and dark fantasy. FEAR THE LIGHT is his first novel. More books are on the way.

• "This is a brilliant take on a Dracula novel, I have read so many Dracula and vampire books especially recently which I love; but they have become a bit samely. NOT WITH this one it has a completely unique edge to it.", Gadget Girl Reviews
• "I really did enjoy this as a read. [...] This is the sort of book that will naturally translate into a screenplay", Taliesin meets the vampires