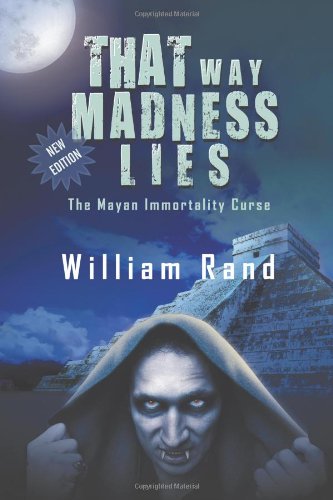 about this book: The concept of the horror novel That Way Madness Lies, The Mayan Immortality Curse began with a question: Why did the ancient Mayans abandon their cities in 904 A.D.? The Maya, an advanced culture, discovered the secrets of medicine, architecture and astronomy, and then? A tour of the Chichén Itzá ruins in Yucatán made me wonder why the entire southern part of a civilization would simply leave such magnificent cities. Theories of famine, natural disasters or war abound with no agreement. Perhaps my Catholic upbringing brought the "Tower of Babel" biblical story to mind. A penchant for horror writing led to the idea of vampirism.

I had always pursued an original twist to the familiar vampire legends, with little success. The Mayan puzzle, melded with the "Tower of Babel" legend, gave me the new twist. Maybe excessive arrogance or ambition defeated the Mayans. All I lacked at that point for a good story was a modern connection and additional research. Contemporary United States culture gave me the connection in our obsession with beauty and fear of aging. Research into ancient Mayan culture and a study of the diaries of the Spanish conquistadors and other explorers of the era gave me the raw material necessary to begin the story.

On the surface, then, the horror novel That Way Madness Lies, The Mayan Immortality Curse developed into an intense vampire story with history, cultural connections and character. Mayan history sparks the flame of the plot which leads to the violent conflict between a middle-aged archaeologist and a vengeful brother.

Typically, modern vampire novels, and most any horror novels, for that matter, focus either on menaced humans struggling against the monster in an attempt to destroy it or on the monster's attempt to survive, using humans more or less as food. My vampire novel shows sympathy and development of the characters on both sides (along with plenty of vampire blood and gore), appealing to horror fans as well as to a broader audience.

There is more to the novel than vampire violence and interesting characters, however. That Way Madness Lies is also a study of United States and Mexican cultures as well as themes of prejudice, discrimination, aging, love, honor and loyalty. Hopefully, in addition to frightening readers, the novel will also make them recognize the truth of their lives and think.