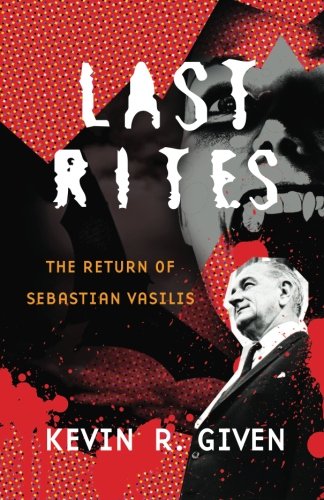 Book: Last Rites - The Return of Sebastian Vasilis by Kevin R. Given

about this book: This book is about vampire hunter Karl Vincent. He is visited by the ghost of a vampire he destroyed years earlier, Sebastian Vasilis. Sebastian is in all actuality Radu Cel Frumos, the brother of Vlad Tepes, Dracula. Sebastian is recruiting Karl on a mission to prevent the resurrection of the deadliest vampires known to mankind: Lilith, Sekhmet and Kali. Lilith has already been resurrected. If all three are resurrected they will form an evil female trinity which will take over mankind.

• The primary readers of the book will be fans of horror/comedy novels. It's "fearless Vampire Killers" meets "Magnificent 7"

• I wrote the first draft in six months.

• I came up with the title by the fact that Sebastian was returning from the dead to recruit the man who killed him on a deadly mission.

• The designers at Createspace helped choose the cover.

• The hardest part of writing the book was the chapters that involved Nassar and how he was recruited to join the vampire hunters.

• I learned that writing a novel is harder than it looks.

• I want to say to my readers that I hope you have fun reading this novel.