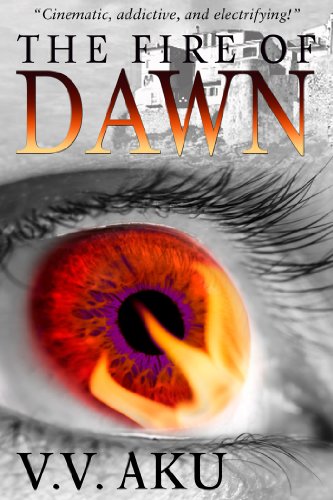 Book Review: The Fire of Dawn by V.V. AKU

about this book: The Fire of Dawn? a scintillating tale of and average Dutch teen who turns out to be extraordinary.

The morning after her eighteenth birthday party Leah Koopmans wakes up at a deserted bus stop in The Hague, covered in soot and ash, and without any recollection of how she got there. The only thing she painstakingly remembers is her friend burning to death in the nightclub they visited the night before. Although Leah doesn't have a scratch on her, she feels that her body has changed. After sun set, her skin turns a dazzling gold. Her senses heighten and her muscles possess an uncanny strength. But with these new powers comes a thirst that can only be quenched by one thing: human blood.

Consumed by horror over what she has become, she is lost until she meets Max Machiavelli, an inhumanly handsome immortal. She joins his coven in Amsterdam and soon discovers that her dislike for taking human life isn't the only thing that sets her apart from this group of herculean strangers. As she is confronted with who she really is, memories resurface and the realization that she is the one who started the fire in the nightclub that killed her friend. Leah fears the coven's rejection if they find out about her pyrokinetic ability, especially because she now knows that the inferno in the club wasn't the first time she has incinerated the people she loves. The only person she feels truly comfortable with is Max and it doesn't take long before infatuation turns into blistering passion.

Still, life as a bloodthirsty immortal is hard to accept. Even more so when she discovers that she is at the heart of a war that has been raging on for centuries. Pursued by The Brotherhood of the Light, an ancient organization set out to destroy her, Leah is determined to learn self-control and bring an end to her kind's reckless bloodshed. She risks life and love to embark on a journey that will not only reveal her destiny, but will also change the fates of both humans and immortals forever.

From the picturesque canals of Amsterdam to Corsica's limestone cliffs and the untamed Siberian wilderness; from first loves to fierce battles, The Fire of Dawn is a 83,900 word tale packed with romance, betrayal, and bloodsucking suspense. The theme of alienation, self-acceptance, and how to develop the strength of purpose to find one's self is followed throughout and is something young adults across the globe can relate to.

As far as vampire reading goes this was pretty interesting. I found myself immediately thrown into the story, rather than having to wait through two chapters of of the main character's history. The way this story progressed I gained the important information of the characters along the way. This book gives a slightly different take on vampires and giving how fantasy is my favorite genre it was refreshing. I most definitely recommend this story to anyone who wants to lose themselves in a vampire fantasy. It was a thrilling ride of mystery, intrigue, love and loss, action and suspense. I couldn't put it down. [by Clair]