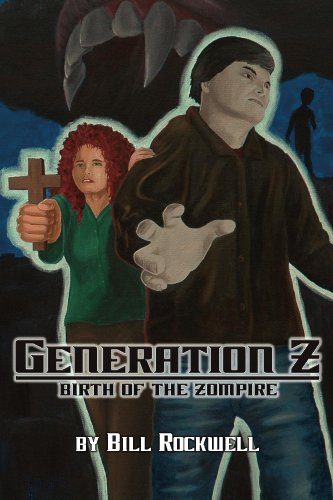 Book: Generation Z Birth of the Zompire by Bill Rockwell

about this book: My novel explores the emotional dilemmas faced by a man and his girlfriend after he is bitten by both a vampire and two zombies. The combination, a Zompire, results in his retaining his humanity and love for his girlfriend; however, he is no longer human, and must deal with being shunned from society as a fiend, the problem of only wanting blood for nourishment, and, most importantly for him, trying to convince his girlfriend he still loves her and represents no risk to her. Their relationship is tested as they pursue the vampire to discover the reason for the original attack, destroy him, and fight off his vampire army as they take over first the hospital and then threaten the town.

The idea for this novel came while watching "Night of the Living Dead," and wondering what would happen if someone had already been bitten by a vampire before a zombie bit him. The above problems sprang into my mind. This had to be the first of the trilogy because the Zompire's new abilities and limitations are fledgling (since the novel only covers a few days) and will change over the next two novels. Character development is most important to me as a novelist, and, as such, what occurs in the story is either driven by the characters personalities which must develop and change during the course of the story in order for them to even survive.

The story is basically a Good versus Evil story with sides not as obvious as it may appear...and will change over future novels.

I hope readers are entertained throughout the entire book, and are satisfied with this volume and can't wait for the next.