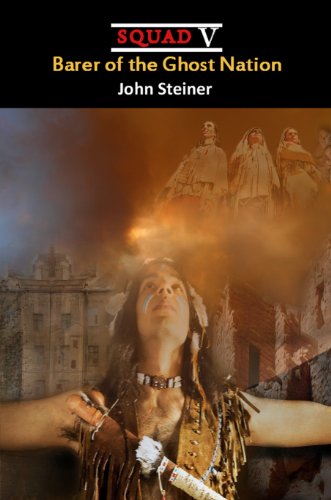 about this book: As the third book of the Squad V series, Barer of the Ghost Nation deals with issues different from the prior two installments. The three books could be read out of order with few vague references to the first or second. The main character is a sole survivor of a Mississippi Valley Mound Builder civilization that died out when diseases introduced from Europe sweep across the continent. Int he case of Wanniukaga, the spiritual leader of a lost indigenous nation, the last few of his people were killed by three European vampires. He is unintentionally infected during an attack and contracts vampirism.

Plagued to live for centuries, Wanniukaga haunts the abandoned inner blocks of St. Louis, where his city-state civilization once existed. Having borne witness to the horror of the subsequent American Indian Holocaust, he is traumatized and develops multiple personality disorder. This, he believes, means he carries with him the spirits of all his people. Through the story some of those personalities emerge to "lead the Ghost Nation" while Wanniukaga's personality is dormant or lingering in the corners of his own mind.

As with Snowflake Girl, Barer of the Ghost Nation addresses real life issues. In this case, the internal conundrum that Native Americans face in preserving their cultural identity, asserting their human rights, and survival in American society. Unlike so many popular stories about American Indians, Wanniukaga isn't dependent on a "great white hope" to save his day. His story is one of self-empowerment and perseverance liken to those who experienced the end of the world and lived through it.