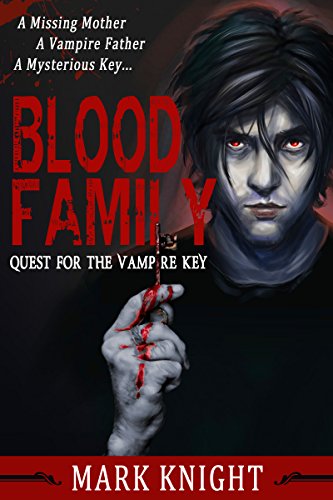 about this book: Blood Family is an urban fantasy for Young Adult readers and beyond. Back in 2004 I decided I wanted to write my own take on vampire lore, and to have the tale center around a young man who was still finding his path in life. I knew right away that Daniel had to come across as a real teen with real problems, set against an average, nuts-and-bolts modern day backdrop.

Daniel Dark is the seventeen-year-old son of a Baptist minister and his wife. Life in south suburban Boston is going pretty okay for Daniel – he has a girlfriend, a crew of good buddies, and a job at a local garage. He's become complacent, however – lazy, goalless, empty. Something is not quite right with his life, but he just doesn't know what it is.

Everything changes the day a mysterious package arrives. It contains a strange glass sphere, through which Daniel receives a telepathic communication. The entity who speaks tells him that his parents are imposters, that he, Dominus, is his real father. The sphere detonates, covering Daniel in blood – human blood. This begins a transformation. Fangs. Amplified strength. Speed. And a desire to drink blood.

Both his parents are horrified by the transformation, especially Pastor Nathan Dark, who will do anything to destroy the evil that he now believes possesses his son. Daniel's mother finally reveals the truth. He not their biological son, but adopted as a baby. He is a dhampir – a half-vampire, born of his adoptive mother's sister and a master vampire named Dominus. They had taken Daniel in as their own to protect him, to keep him from his malevolent vampire father. Daniel was never to find out what he truly was, but now the truth was out, and there was no going back.

Leaving home, Daniel follows a string of strange clues that he hopes will lead him to his birth mother, Celeste, and to the master vampire, Dominus, who has incarcerated her in his secret stronghold. Daniel travels from Boston, to Mexico, to England in search of his mother, his dhampir powers evolving along the way.

Daniel knows that he has a fight on hands. For vampires, he has discovered, are not like in the movies or books. They are demonic entities hailing from an invisible realm who possess and transform the bodies of willing hosts, changing them forever. The hosts can be slain, but the demon inside cannot. Daniel knows he must find his mother, and destroy Dominus.

But how can he destroy a creature that cannot be killed?

• "To sum this book up in two words is easy: Mind blowing! You know a book is great when the ending not only has you begging for more, but also wanting to chain said author to his or her computer in the hopes that the sequel will get done faster." — Sabrena Pattat

• "Blood Family: Quest for the Vampire Key is an awesome, awesome, awesome book. Did I say awesome? I read a lot and believe me, I've not read anything like this since I read Anne Rice novels back in the 90's." — Jodie Pierce