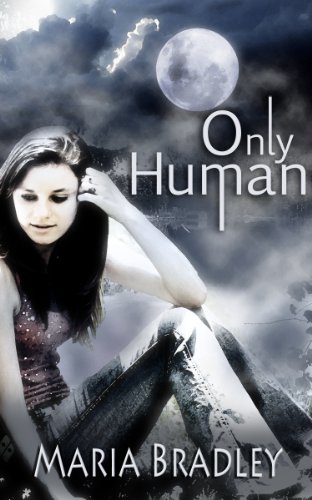 Book: Only Human by Maria Bradley

about this book: Only Human is my first mythical, fantasy book about (you guessed it) 'Vampires'. I adore the Twilight series, True Blood and The Vampire Diaries, but I wanted to write a story from a younger child's point of view. Aecia isn't a vampire hiding her thirst from all the humans in her world, she is exactly the opposite of that. She is a 14 year old 'human' with all the normal difficulties and adjustments of a teenager, but her futuristic world, set in 3012, is ruled by vampires! Evolution has ensured that the stronger, dominant vampire virus has infected more and more humans, until eventually the stragglers that remained lost hope and their own compassion and 'humanity' was the cause of their demise.

Aecia's secret is a heavy burden, and in her desperate loneliness she creates a diary 'Amica' who becomes as real to her as a living human friend. Amica is with her as she masquerades as a vampire with a disguise fashioned by her beloved 'Uncle'. Amica is with her when she falls in and out of love and becomes a young woman; she remains with her when Aecia's worst fear is realised and she is subjected to the cruelty of the Vampire Government.

As Aecia's life spirals out of control she is plunged into a life-threatening existence and she clings to 'Garok' her first love, and puts her trust in him. Is Garok himself, human, as she hopes? Can he be trusted, and can she, at last, reveal her secret to another living being?

A mandatory school trip to 'The Ordinatio' (The Vampire Government Palace) becomes the setting for the terrifying revelation of her condition, and later, when the truth of Aecia's origin is uncovered; it shakes the foundations of the blood-thirsty vampire world forever!