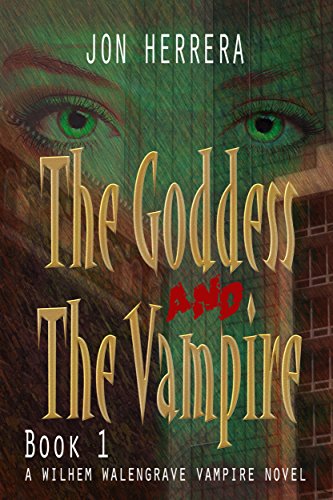 Book: The Goddess and The Vampire - A Wilhem Walengrave Vampire Novel by Jon Edward Herrera

about this book: This story takes place in a universe where Supernaturals and human peacefully coexist, though they still have some problems from time to time. The problem Supernaturals are called Rogues, vampires, Weres, and others that can't follow the rules of the Vampire Commission. Each large city has a Vampire Consulate, and the Fort Worth Consulate is where Wilhem Walengrave spends a good deal of his time.

Wil is the Vampire Master of Fort Worth, Texas. This is the first book in the Wilhem Walengrave Vampire Series. It covers Wil's sex life, his battles with bad guys, and the many times that things catch fire or blow up whenever he is around.

In this book we met Desiara, the Goddess of the World's End and Wil has to try and stop her from destroying the world. Along the way we met his human lover Sally, his co-worker Andy, his boss Fedor and his family.

In this world a vampire doesn't have to hunt for blood, it is donated in exchange for a bit of the vampire's power. People who do this for one vampire for an extended period of time are called Chosen. Wil has Chosen his Mother, Father, and Grandfather.

In The Goddess and The Vampire, we follow Wil as he chases Rogues and meets Katie, an Elf with special properties.