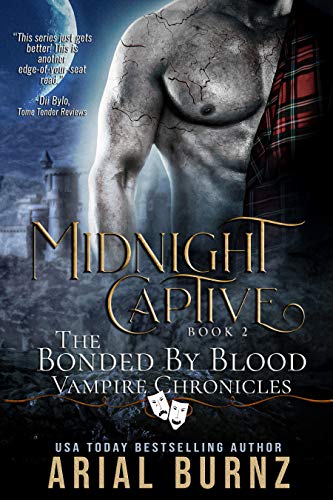 about this book: This is the second book in the Bonded By Blood Vampire Chronicles, featuring Cailin MacDougal - the toddler daughter of Davina in the first book, Midnight Conquest. In Book 2, it's seventeen years later and Cailin is about to wed her betrothed, James Knightly…but while he's been away at fencing school, she's been learning her own form of combat—battling Vampires. How can she find peace and have a family with Angus Campbell, her father's enemy, forever stalking them? Cailin takes matters into her own hands and is willing to sacrifice herself for the sake of those she loves.

Cailin was such an adorable character in the first book, she practically begged for a story of her own. This novel takes place in 1531 of Scotland near Edinburgh and also goes deeper into the lore of vampires I've created for my series—their origin, a new character who is the Keeper of Secrets, and we see Cordelia's connection to the back story of the prophecy that is driving the entire series. I hope you enjoy it!