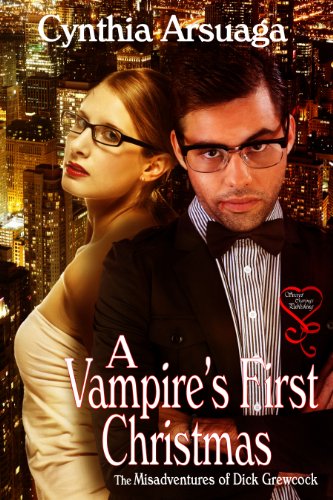 Book: A Vampire's First Christmas (The Misadventures of Dick Grewcock) by Cynthia Arsuaga

about this book: A Vampire's First Christmas started out as a funny Christmas story submission for a friend and I didn't make the timeline so kept held it back and rewrote for 2012. This is the first book in the series of five, each one releasing around a holiday. The next one is titled, A Lusty Vampire's Valentine.

The story follows the trials and tribulations of a newly turned vampire named Richard "Dick" Grewcock. He has problems that result in some comedic moments while dealing with his eccentric Master Vlad. He's an IT Geek who works at a law firm in Orlando, Florida and is disappointed with the results since the night he became a vampire--on Halloween. All he wants for Christmas is a girlfriend. Is that so difficult or too much to ask for?

Noelle St. Nicholas comes into his life, or should I say existence, on Christmas Eve and things start to look up for Dick. On his first adventure to find love, Dick Grewcock gets a Christmas present he won’t soon forget.