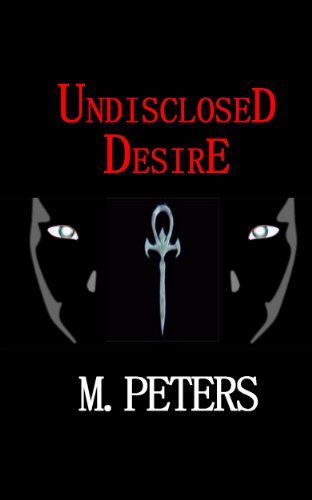 about this book: Undisclosed Desire is my first novel, even though I've been writing all manner of stories for years. A combination of National Novel Writing Month and my fiancée (who if my rock and support in everything I do, not just my literary pursuits) were the inspirations for this novel - and the characters actually came from a series of short pieces that my fiancée and I would toss back and forth to each other during our time in High School together. After all, who needs to pay attention in Math Class when one could be writing about vampires instead?

It took much longer than I thought it would to write this novel. The first fifty thousand words were completed in early November, 2008, but the first draft of the book wasn't finished until my fiancée began pressuring me about going back to finish it sometime in 2009. It was left alone for months at a time, as I became increasingly distanced from it and writing in general during the last year and a half of our grandmother's life, but in 2011, after completing another successful National Novel Writing Month (on a different document), I got down to business. Mostly inspired by her support (and the idea that I could see my book in print with the coupon Createspace was giving out to all NaNoWroMo winners that year), the book was finished and made ready for publication in June of 2012. There was a fair amount of research involved in the book's writing - but I enjoyed finding out all sorts of things about the dress, habits, housing and attitudes of 16th century Spain, so none of it was drudgery in the least.

Keith and Javier have come a long, long way since those early stories - looking back at what's left of them from high school, they're not the same characters at all, and, I'm finding, as I write the sequel to Undisclosed Desire, that they aren't even QUITE the same characters in THIS story as they were in the original novel. But they're still feisty and thoroughly in love with one another. Undisclosed Desire is a darkly fantastical romance, full of werewolves, vampires, hot and steamy sexual liaisons - there's something for all manner of adult readers here. My book has, in the words of some of my reviewers, "broadened (their) reading horizons to this type of story", and given them a "wonderful new read". Recently, Undisclosed Desire spent close to a week in the Top 100 Books in its genre, so I must be doing something right!

The title was gleaned from a popular song by a band called "Muse", and I found that the lyrics fit the two main characters, Javier Estas and Keith D'Ameron, so perfectly, that it seemed perfectly natural to use it as the moniker for my book.

I'm delighted to find that I'm reaching readers all over the world with my story - one of the first person-to-person reviews I received on the book was a story passed to me by one of my readers, concerning an elderly lady who had borrowed a copy of Undisclosed Desire from the person who passed on the review. She is ninety-eight years old, and asked to read the novel when she was told about it, and, upon finishing the novel over three days, told her neighbour that this was the "best fruity (erotic) story I've read in years and, when you get to my age, and a good racy read is all you've left to you, you WANT them to be good ones!" I'm thrilled to be reaching people like that, and thankful I get that chance by using KDP and Createspace.