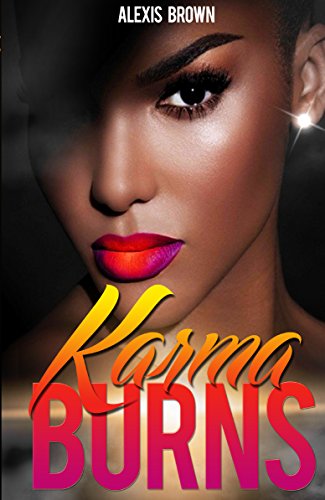 about this book: Do you love a good page-turner? • Would you enjoy a novel that you cannot put down because you are completely hooked after the first chapter? • How about a book that is packed with mystery and cliffhangers? KARMA BURNS is the book for you then! Shauntel Barnes is a successful self-built entrepreneur who is being stalked and terrorized. Her world of secrets, lies and betrayal have come back to haunt her; as terror lives on her doorstep. She has no clue who could be the culprit nor enough time to catch her breath to try to figure it out. The story is raw, uninhibited and filled with life lessons. As these incidents unfold at a very rapid pace, others around Shauntel are experiencing their own drama. The will characters draw you in and make you feel like you are a part of their circle! While she doesn't know who is stalking her or really what to do about it, there's one thing that she knows for sure, lovers and friends come and go, but Karma BURNS!

The first installment of a four-part series, Karma Burns is not the first book I wrote. It was however, the first book I felt was appropriate to publish. This novel makes me feel like I have something great that needs to be shared with the world! The urgency I felt when I completed the novel caused me to be anxious in releasing it. I skipped quite a few steps (professional editing being the largest one) when I first released the book. This taught me a very valuable lesson. Never give birth to a project prematurely.

The story is very near and dear to my heart, mostly because it was very simple to write. The thoughts of Karma never seemed to stop flowing even keeping me awake many nights until I put them down on paper. Because of this, my new team and I went back to the drawing board with Karma Burns early this year. We refused to release it until it was impeccable, no matter how long it took. After many long nights and several tears of adversity, Karma was re-released in June of this year.

My intention in writing this novel was to entertain my readers on every level, arousing all of their senses, leaving them wanting more. That is exactly what happened as most of my readers have fervently asked me to write a sequel to Karma Burns. This dedication from my readers birthed the series that is now simply Karma! The second installment, Karma Returns is scheduled to be released in April 2017. Do not be left out of this movement. You need Karma Burns in your life today!

I wish you Happy Reading and thank you in advance for your support.