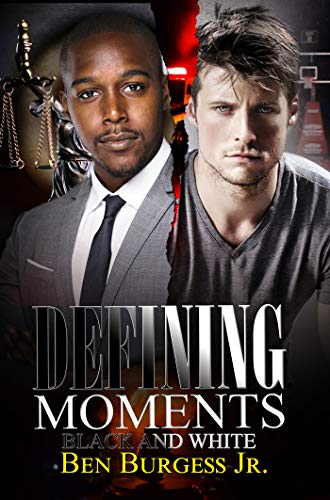 about this book: Defining Moments: Black and White is the story of Ben Turner and Bill O'Neil, two lawyers that work for Wayne, Rothstein, and Lincoln, one of the biggest law firms in the country. Ben and Bill are given two racially charged cases that affect their personal lives. Ben is assigned a case where an African American rapper allegedly killed a gay couple and two cops. He was found at the scene holding the murder weapon and had the blood of some of the victims on his clothes. Bill is assigned a rape case where a White NBA player allegedly raped an African American exotic dancer. The strip club had video cameras in the VIP room with audio that captured the incident, which doesn't look good for Bill's client. Since both cases look nearly impossible to win, the partners at the firm give Ben, and Bill added incentive to win by stating that whoever does the best in their case will be highly considered to become a named partner for the firm. Both Ben and Bill have motivations as to why they want to win. Ben wants to prove to his white girlfriend's parents that he is just as smart, hardworking, and capable as anyone white, and their daughter isn't downgrading by dating him. Ben also wants to prove to himself that he is "Black enough" and isn't the "Oreo" that many people in his past has called him. Bill wants to make partner at his firm so he can take care of his mother, who is suffering from multiple sclerosis. He wants to put her in a better facility that can make her more comfortable. He also wants to be able to give his African American girlfriend the wedding she deserves.

This book touches on a lot of problems that are going on in the world today, and I want everyone to read it to look at the world from different perspectives. My personal life and the life of my friends and family inspired me to write this book. It took me a year to complete this book. I would say the hardest part of writing this story was writing from different perspectives. Writing as a woman when you are a man is difficult. You have to do a lot of research and a lot of listening to get the voice right. The same goes for writing as a white character when I am black. As an author, you want to make sure that you're not reinforcing stereotypes or writing characters that are too offensive. I want this book to improve the world. I want everyone to see that we all have biases, but if we're conscious of those biases, we can be better people. My major goal is to have this book adapted into a movie!