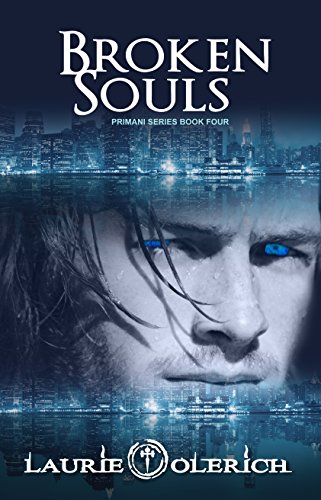 about this book: "Fans of Lara Adrian, JR Ward, Donya Lynn and Nalini Singh will love this series about Angelic enforcers."

Broken Souls is the fourth book in the Primani Series but is a standalone title.

Rori Austin's life is over. She just doesn't know it yet. Orphaned as a toddler and raised in foster homes, she's had a pretty crappy life so far. Since turning 24, she's been plagued by terrifying nightmares that leave her gasping with a hunger she doesn't understand. Alone and broke, she's struggling to make it one day at a time. When she blacks out and wakes up in 1969, she knows something is desperately wrong.

Declan Manning is Primani, an immortal soldier charged with keeping demons under control. Lucky for Rori, he's in the right place at the right time. After miraculously saving her life, he vanishes with no intention of coming back. The last thing he needs is a woman in his life. But his intentions can't override his instincts. Something is wrong with this woman. Something that will get her killed. When he looks into her exotic eyes, he knows there's no walking away from her.

The clock is ticking on more than Rori's life--her soul's been marked for Hell and the demon is ready to collect. As Rori's secrets are revealed, Dec's stunned to realize she's so much more than human and he will do anything to keep her by his side.