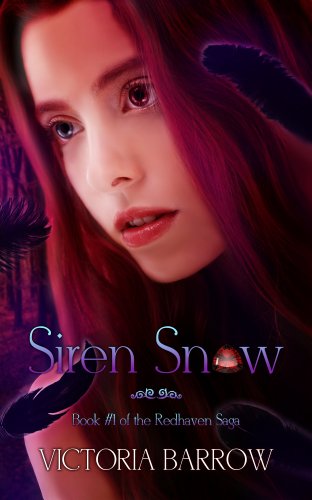 about this book: Siren Snow (so named for the setting of the main story) is the first book in the Redhaven Saga, and my first book (ever!). The Redhaven Saga centers around a young witch named Lucy (Lucilla Sinclair), who's the witch warden for Washington state. She keeps humans who don't like her safe from things that aren't particularly fond of them either, and she does it for basically minimum wage. She makes up for it by running an occult shop of sorts, where she sells enchantments, tonics, etc. For the most part, she's okay being left to her own devices, but when a freak winter storm lands a Siren on her doorstep, she's suddenly thrown into a crazy rescue effort. (Which may or may not involve some werewolves and a demon farther down the road.)

This book is aimed at the up-and-coming New Adult genre (generally for readers between the ages of 16-26). It has similar themes to Young Adult books, but it has a harder edge.

The cover of this first book features Lucy herself, and was actually a custom made photo manip. I especially love it because Lucy came out exactly as I pictured her in my head, heterochromia and everything. I knew I wanted to feature Lucy, because I worked so hard creating her, but I hadn't expected the cover to be so spot on.

The hardest part about writing my first ever book (ever!), was avoiding distraction. There's a lot of music to listen to, and things regarding promotion to attend to, and it took a fair bit of time away that I could have spent writing. Sometimes it was hard to just sit and write, but I managed to get the manuscript done in just about a month, give or take a few days.

The biggest lesson I learned from writing this first book is that stuff changes. The original plot was outlined chapter-by-chapter, very carefully, and by the end of it, stuff had been moved around and I'd added 2 and a half chapters! I learned that writing is very organic, and although you might have a nicely planned out map for it, it doesn't mean the book will follow that.